In 1970, Masters and Johnson made popular a new technique that they called “sexual focusing”. This technique simply consists in focusing one’s attention on the sensations that occurr during lovemaking, without letting one’s mind to loaf.

Applying this technique during foreplay or during massage exercises was the first step in curing sexual dysfunctions for both men and women.

Similar to the Concentration (Dharana) phase in Yoga, the sexual concentration is an absolutely necessary phase for reaching the perfect harmony in couple, by favouring the focusing of the very powerful energies that take place during lovemaking and guiding them to the high levels of the human being.

We don’t have to see the method of achieving a meditative attitude during lovemaking as an exercise, as an instrument or as a technique performed in order to obtain a purpose in the future – the sexual performance, the mystique experience or anything else.

It is better to see it only as a way to go deep inside of us, in the present moment, in what we are doing and in what we are experiencing, therefore a way to stop our thoughts.

There are more aspects of eros we can firmly focus our attention on, in order to eliminate any other thought, in this way driving ourselves close to the subtle plans of the mystique conscience. These aspects of the lovemaking can be active or passive.

Yet, the most beautiful feeling is the feeling of merging with the lover and with the entire Universe. This phenomenon appears step by step through continuously refining of the transfiguring act. 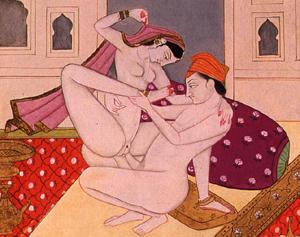 HOW CAN WE STOP OUR THOUGHTS DURING THE LOVEMAKING?

The stopping of the thought has become a popular technique. In the arsenal of Western therapeutics, this technique has entered powerfully after the 70s, being used as an active and direct treatment in the fixed idea (monomania). It came in contrast with the psychoanalytic method which was slower, more indirect, though in a certain direction – more comprehensive.

The idea that a person can direct her perception and attention, performing in this way a certain control over his/her own cognitive functions, is applied in order to modify the sexual behaviour. It proves to be very useful especially when the sexual dysfunctions are generated by a disturbing mental pattern that occurs during the lovemaking.

As soon as we will become aware of the fact that the thoughts are external to our being and that just by feeding them and by accepting them we make them alive and sustain them, we will easily realize that it is easy to stop their activity.

An efficient way to begin is to ignore them and not pay any attention to them, by making efforts to concentrate over the sensations we feel while making love.

With the time passing, the stopping of these thoughts will occur spontaneously, while the person is paying attention only to the orgasmic and sensual experiences.

1. In case that certain inhibitory thoughts or certain thoughts, which are disturbing the harmonious lovemaking occur, because of some psychic traumas in connection with the sexual activity, you must have in mind to concentrate yourselves over the most intense sensation (tactile, visual, tasting, smelling) you feel.

Let yourself be absorbed by this sensation, let yourself become one with it. As much as you melt in this sensation, experiencing it at maximum intensity, you realize that any disturbing thought will disappear, letting the place free for the pleasure and for the happiness.

2. You are ready go to bed (after they have undressed and had a shower). She is lying down while you softly caress her back sensually.

You have to concentrate yourself only on the sensation you receives from touching her skin and the harmonious forms of her body. In the same time, the woman has to focus her attention on your caresses.

She mustn’t let her mind be disturbed by other thoughts. She shouldn’t think of anything else. In this way you won’t let your minds wander. By concentrating on your sensations you can be more aware and fully experience all the sensations.