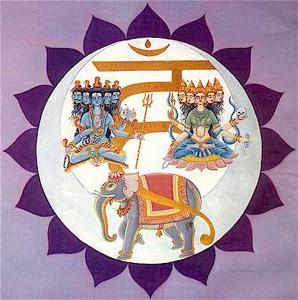 “Intense focus and meditation on the subtle element corresponding to this center of force is defined in the Yoga texts as the special, beatific expansion Akashi Darana. The person who practises this form of meditation will not die, nor disappear at the dissolution of the world. This person obtains the knowledge of the past, present and future as well as the control of the mysterious energies of time.” (Swami Sivananda)

Location: the fifth energy center, Vishuddha chakra is located in the physical body in the area of the neck.

Symbolical representation: it is the dwelling of sound, and dreams, and the symbol of purity.

On the psychic level: it governs expression, awakening of inspiration, eloquence, archetypal models. This center of force is closely connected to the feeling of acceptance, superior receptivity, and subtle protection.

On the physical level: it coordinates the activity of the vocal cords, the hearing system, pharynges, oesophagus, as well as the spine. The corresponding glands are thyroid and parathyroid. This center of force is connected to the complex process of nourishment.

Specific reactions in the case of energetical disturbance: the person in which the energies characteristic to Vishuddha chakra are disturbed will have to face an imbalance at the level of the above-mentioned glands. The emotional factors are nonetheless extremely important in triggering this disease. These factors are translated in symptoms as insomnia, anxiety and depression. 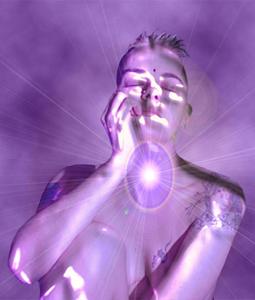 The effects of meditating on this chakra are calm, serenity, purity, melodious voice, the awakening of artistic inspiration, the capacity of interpreting sacred writings, scriptures, of understanding the hidden message of dreams.

The person under the influence of Vishuddha Chakra no longer find attractive, nor important the distractions and pleasures caused by the senses and intellect.

Such a person will seek real knowledge beyond the limits of time, and beyond hereditary or cultural conditionings. Entering its field of energy equals the freedom from the whirlpools of this world and the control over our ego.

The idea of cosmic consciousness is related to this center of force. Both physiologically and psychologically, Vishuddha Chakra corresponds to the complex process of nurturing. The balanced development of the three centers of force leads to the formation of a balanced and harmonious personality.

The fourth center of force, Anahata Chakra is an intermediary stage, a central point that unifies the inferior levels with the upper levels, the sphere of survival, social living, and assertion of ones personality with the subtle, refined levels of the manifestation.

Not by a mere accident is Anahata Chakra the center of the heart, of love, of the awakening of the soul. The next stage is then the acquiring of a superior state of receptiveness, and an opening towards the divine inspirations.

In this sense, Vishuddha Chakra corresponds to the process of nurturing, both physically (the projection of Vishuddha Chakra is the neck) and subtly, referring to an energetical nourishment through the access in the superior worlds of the universe.

On this stage, the notion of “inner superior consciousness” becomes accessible, and the person may intuitively enter the mysteries of the divine manifestation. 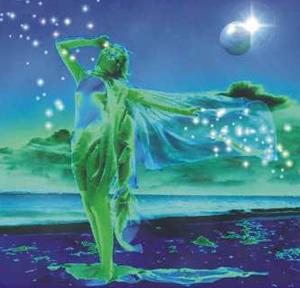 TIME IS THE MIRROR OF ETERNITY
The state of receptiveness to the superior, elevated worlds makes possible the opening of some access gates to these universes. These experiences appear spontaneously in meditations, or they may be reached through the pouring of the divine grace. The psychologist Abraham Maslow named them “peak experiences”.

For all the people who had such experiences, in their moments of ecstasy, intuitions and transcendence these experiences represent the most important thing in their lives, and are considered as the truly most precious aspects of life, that give life its value and measure.

They may be certain forms of overcoming ones individuality, or simply a sensation of being out of time. 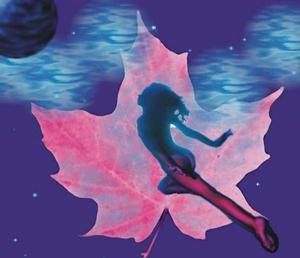 The following quotation from “Memoir In the Defence of Caligostro” (from Serge Hutins book “The Secret Societies From Yesterday till Today”) expresses very well a superior level of consciousness of a human being:

“I do not belong to any age, and I do not belong to any space. I feel permanently that I am outside time and space. My spiritual being experiences in its essence, the eternal existence and if sometimes if let myself sink into the cosmic thought climbing back up the course of ages, if then I reach my almighty spirit towards a superior way of living, different from that which you are familiar with, I experience the paradise-like ecstasy and I become that who I want to be. Participating fully and consciously to the reality of the Supreme Being, I conduct almost all my actions guided by the divine inspiration that helps and surrounds me.”

THE ART MOULDS THE ARTIST AND THE ARTIST MOULDS THE WORLD
This superior inspiration appears only in the more or less conscious moments of superior receptiveness. The great composers, the people of art, even the scientists have had such moments of brilliancy.

If a person had this inner state of superior receptiveness and truly allows the resonance with elevated subtle realities, these realities will materialize into sublime ideal forms into the sphere of the consciousness.

Any kind of artistic experience or realization not only re-create art, but also they transform the receivers personality because through symbols received telepathically or created exteriorly, the art creator is capable of reintegrating certain aspects and of reaching a new elevated level of consciousness.

More than this, the act of creation and the act of being created are complementary parts of the same phenomenon. Through contrast, when the art and the inspiration are considerably embarrassed by the ego, creativity stagnates.

When the ego becomes exacerbated, art disappears, and when the ego disappears, universal art flourishes at its own will. When the artist is crushed down by the ego, allowing him to be dominated by petty calculations he begins to “imitate” himself and he is no longer capable of transmitting the sublime to the others. These inspirations then do not transform him and his personal inner growth stops. 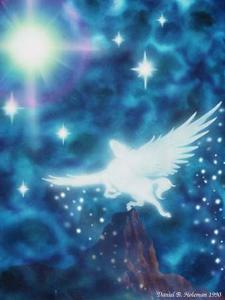 THE GENIUS IS NURTURED WITH ESSENCES
In the genuine act of creation, free and manifested uninhibited, characterized by a “crazy” spontaneity, the artist nurtures himself first and most important of all. At this point, he offers a lot to the others.

When a person offers himself or herself to the world, they accept in fact the subtle guidance and inspiration of the inner superior consciousness. From this point of view, we may say that the superior act of nourishing is in fact equal with being nurtured. Through Vishuddha Chakra, the brilliant artist performs the ineffable identity with the inner voice, through his art.

In the case of a person who has the consciousness predominantly at this level, his or her role will be equally as distributor and receiver of the divine grace. Through the sublime experience of receiving the grace, the individual consciousness nurtured with the nectar of the divinity goes up to the next centre of force, Ajna Chakra.

Here the person realizes the mystery that the one who gives and the one who receives are in fact one, fused in ineffable unity, just as the drop that is now reunited with the ocean it used to be a part of.

For a better understanding of the 5th center of force, we explain a few key-words:

Akasha – subtle fundamental element that the yogis discovered for thousands of years as pertaining everything in the universe. In some secret texts, it is depicted as the space ether that comprises and records everything.

In the East, Akasha or the all-comprising ether is the subtlest of the five elements (earth, water, fire, air, and ether). Akasha is a fundamental substance that the wise advanced yogis say to fill and pertain all over the universe and it is the basic support of life and sound. In Akasha is registered instantaneously everything that occurs in the universe, and these images may be read by clairvoyants and are called akashic clichs.

Eternity – that which is truly divine and exists beyond time. The states of genuine spiritual elevation, which prompt us on the peaks of ecstatic consciousness are tangents to the perception of Reality.

This feeling of the eternity appears also as a state of satisfaction when we are completely into the present. The present moment is the mobile image of the eternity, and simultaneous experience, with depth and authenticity of the moment, together with extracting its essential significances, means in fact to transcend it through the access to the sublime sphere of force of authentic spiritual vision and experience.

In the spiritual realm, eternity is the spiritual counter-part of time in our phenomenal world. As Plato said, “time is a moving image of eternity”.

Intuition – represents the direct, immediate knowledge of truth, through resonance and without involving the thought and the mind. C.G. Young defined intuition as one of the four fundamental psychological functions of the human being, the other three are thought, feelings and senses.

He describes intuition as a function of exploring the unknown, which offers possibilities and implications that are apparently difficult to be consciously perceived. Intuition is not an act of will; it is a state of attention and inspired reception.

Inspiration – state of resonance and inner communion that leads to a certain sublime experience, idea and/or action.

It is characterized through the revelation, on a subjective level, of some experiences, representing a psychic condition auspicious to the act of creation, reason that determined Plato to rightfully conceive it as a message of the divinity that pertains those who allow themselves be taken into ecstatic states of trance.

For Schopenhauer, the inspiration was the eternal subtle world of the divine ideas, and for Nietzche it was the expression of the Dionysian drunkenness giving birth to brilliant creations.

Time – the universal property of all forms to be comprised into a certain subtle energy of time, situating simultaneously or successively towards one another. The entire creation is subject to this becoming, so in other words to the subtle energy of time, only through the pure divine consciousness that transcends any becoming and time.

As it is in its essence a subtle energy, the dimensions of time are characteristically modulated by the structures of the individual and cosmic consciousness.

Thus, the information referring to past, present or future events are recorded or stored in a sui-generis magnetic support of the universe, reality that in yoga is named “akasha-ic recordings or clichs”.

The advanced yogic can recall and re-live these traces deposited in the energies of time, after the experience occurred once. Also people that have natively this capacity of recalling the akasha-ic clichs can do it, but these cases are quite rare.

The presence and accessibility of such information in akasha tattva is implied even in the current theories in the modern physics, and examples of this would be the theory of the “implied order”, issued by David Bohm, suggesting that there is a certain phenomenal and structural order in the universe and that this order has nothing to do with either becoming or temporality.

The scientists who lived at the end of the 20th century have proved that our sense of appreciating time is in fact a distortion of the reality.