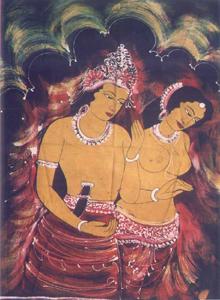 BRAHMACHARYA means continence, refrain, retention. In the TANTRIC vision, BRAHMACHARYA is realised through the sublimation and transmutation of the sexual energy, using it for psycho-mental and spiritual purposes.

The purpose of suspending ejaculation is double: to retain seminal fluid (conserve energy and thus achieve higher states of sexual pleasure and fulfilment) and to transmute its energy (achieve expanded levels of consciousness).

The most recent conclusions of modern sexology agree with traditional TANTRIC teachings. Sexual therapists are now starting to encourage couples to focus more on the process of lovemaking rather than the end result (ejaculation).

The fundamental error couples make, due to ignorance and bad habit, is to believe that ejaculation and orgasm are one and the same thing, that orgasm can be achieved through ejaculation only and therefore ejaculation is the peak pleasure for the couple.

Some women believe that if they are not capable of bringing their man to a powerful ejaculation they are not sensual enough. There is nothing more false.

Stated with extreme simplicity, orgasm is an intense beatific state of consciousness and cancelling of ego, with profound harmonising, relaxing and regenerative effects.

Male and female ejaculations are only complex physiologic processes of explosively energetic discharge with dim manifestation of a brief, incipient orgasm, experienced in a selfish unilateral way. During ejaculation the vital energy is quickly wasted for no purpose (except, of course, when conception is wanted).
In this completely new and spiritual approach, sexuality becomes a modality of self-knowledge and spiritual growth. The extraordinary intensity of emotions felt in this way transfigures both man and woman, revealing unknown dimensions of their psyche.

Sexual union between two lovers which love deeply each other becomes a modality of concentrating and directing the consciousness’ activity toward the Supreme Being.

Due to the enormous intensity of this union, the consciousness of both lovers develop and fuse, at the beginning between themselves and later with the Cosmic Consciousness.

The indescribable beatitude then felt embraces all things and beings. All that still subsists is a never-ending thirst for Unity, only a Lover and a Loved-one.