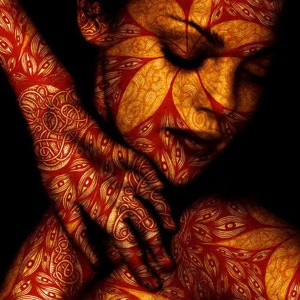 We recognize the religious rediscovery of Woman’s mystery in Tantra. As we’ll see later on each beautiful woman who is full of vital energy is the embodiment of SHAKTI – the feminine principle.

The spiritual emotion profoundly transfiguring towards the fascinating mystery of birth and fecundity and also the recognition of everything that is far, enigmatic, transcendent, invulnerable in Woman, all these come to symbolize the sacred and the divine, the ineffable essence of the ultimate reality.

The woman who is fascinating in her beauty and is full of vital energy embodies the mystery of Creation and the mystery of the Being at the same time, of everything that IS and that becomes death and birth in an incomprehensible manner.

Thus it is prolonged, metaphysically and even mythically, the basis of the SAMKHYA philosophy:

The Spirit, “The Supreme Male”, Purusha, is “the great impotent”, immobile and contemplative, as the absolute witness. He acts through PRAKRITI, “The Eternal Feminine”, that is the dynamic principle, the one who creates and feeds. When a great danger threatens the Cosmos, Gods appeal to the power of SHAKTI to make it go away.

A famous myth tells us the story of how the Great Goddess was born at the beginning of times.
“An evil demon, MAHISHA, was threatening the Universe and even the existence of the Gods. BRAHMA and the entire Pantheon of gods asked for VISHNU and SHIVA‘s help.

Full of anger, all gods focused their energies in a fire that came out of their mouths. These fires mixed together and made a gigantic brilliant, white, burning cloud that finally took the shape of a fascinating GODDESS with 18 arms.

This Goddess was SHAKTI, who managed to destroy MAHISHA the monster and thus saved the world. Thus the Gods endowed SHAKTI with their powers. She was the Unique Feminine Force, the spring that everything came from at the beginning.” The result was a renewing of a primordial state of the universal power.

In Tantra the woman is sacred.

In Tantra SHAKTI, “the cosmic feminine force”, is raised to the position of Divine Mother who sustains the Universe and all the beings, the multiple manifestation of gods (the angelic entities).

It is called UMA, The Virgin, in its primordial hypostasis that precedes the Universal creation. In this case SHAKTI is the highest peak of all worlds, pure and untouchable. Once it manifests the universe, SHAKTI becomes the maintainer of space and time and all subtle and physical worlds.

In its final hypostasis she is the destroyer, KALI, the one who absorbs into the divine everything that is incomplete and limited in order to prepare a new Creation. KALI wants to make the entire manifestation to have an evolutionary sense.

Women can be happy that they got an essential role in religion and spiritual philosophy for the first time. Only in Tantra the female principle has got a real role, just as important as the male one.

It is not about the common, false feminist slogans for equality; it is a way to raise the Eternal Feminine through her own mysterious qualities without an artificial equality with the male principle.

Tantra goes further and presents the Divine Being as a glorious ANDROGEN – the perfect and harmonious combination of feminine and masculine. In other works the Divine is presented as the SHIVA – SHAKTI couple in ecstatic sexual union with continence.

In Tantra the woman and the man are complementary and equal in chances of discovering the ultimate reality.

Of all spiritual ways Tantra is the first who brings the woman and the Eternal Feminine out in the open and enhances their value, to the highest levels. Thus the woman is considered to be solar on sexual, affective and mental levels while the man dominates the vital, will, purity and spiritual levels.

By unifying the man and the woman, by love and transfiguration, they become the divine couple SHIVA – SHAKTI. Thus they can complete one another at all levels of being, creating a Glorious Androgen.