A Few Words about Kashmir Shaivism

KASHMIR SCHOOLS
There are several important schools of the Kashmir Shaivism, of which the most elevated belong to the Trika system.

The word “trika” is the Sanskrit for “trinity”, suggesting the essential idea that everything in the universe has a threefold nature. We can express this trinity as: Shiva (God), Shakti (His fundamental creative energy) and Anu (the individual, the limited projection of the divinity).

These branches of the Shaivite tradition were brilliantly synthesized and unifies by the most illustrious personality and the greatest spiritual accomplished person of this system, the sage Abhinavagupta.

The most important work he wrote Tantraloka, in verse, unifies all the apparent differences between the Shaivite branches or schools of Kashmir Shaivism until that moment, offering a coherent and complete vision of the system.

Realizing the difficulty of such a task, Abhinavagupta wrote also a summary in prose, entitled Tantrasara (“The Supreme Essence of the Tantra“).

PARALLELS WITH OTHER TRADITIONS
“The metaphor of Shivas cosmic dance unifies mythology, religious art, and modern physics. It is indeed as Coomaraswamy said, poetry, but not less science” (Jacques Bergier)

Among the numerous authentic religions and spiritual paths, the shaivism is remarked through the universality of its conceptual model.

In other words, the initiatic vision and understanding offered by the shaivism is so comprising that in it one can find correspondences and similitudes with almost all authentic spiritual paths of the world.

In this respect, the resemblance and similitude with Christianity are outstanding: the trinity – fundamental concept both in Shaivism and in Christianity; the stages of getting close and then united to God are almost identical both in the practice of the meditation – as modality related to the Path of the Individual Being (Anavopaya) from Shaivism, and in the Prayer of the Heart – a spiritual method characteristic to the orthodox Christianity; the overwhelming love and ardor towards God are characteristics of both Christian mystic people and of the Shaivite ones. 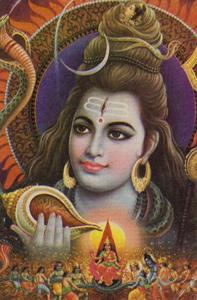 In Shaivism we find, integrated in a unitary vision, techniques and methods that are also found in yoga, tantra and the Zen Buddhism.

In this respect, it is significant the fact that Vijnana Bhairava Tantra, a Shaivite treatise is also one of the fundamental treatises of Zen Buddhism (Japan) and Chan Buddhism (China).

The universality of the vision of Kashmir Shaivism must not surprise us, considering the fact that Shiva represents that aspect of the divinity that is manifested as Great Initiate or Great Savior of the creatures chained by ignorance and suffering.

We can rightfully say that any sincere and frenetic call upon the Divinity is in fact addressed to this aspect of Savior; this hypostasis is known in India as Shiva (“the good and kind”) and any manifestation of the divine grace is closely related to Shiva. Thus, even if the human being does not know it, in any illuminating process Shivas grace plays an essential part.

The comprising vision of the Shaivism is not reduced to correspondences and similarities with other spiritual traditions.

What is truly amazing, even more today when the science knows such unbelievable progress, gaining ground in front of all religions and spiritual paths is the fact that the most modern theories of the contemporary science find obvious correspondences in the vast spiritual tradition of Kashmir Shaivism: the holographic pattern of the universe, the theory of the morphogenetical fields, the theory of the strings, the quantum mechanics, etc.

Thus, the great sage and liberated soul Abhinavagupta composed several poems in the glory of the Lord and wrote almost his entire work in verse, just as the other Shaivite sages.

Authentic art can be a spiritual path, but unlike the “traditional” yoga, this path is not accessible to everybody, but it becomes a true spiritual path only when the person who perceives it is endowed with a certain type of sensitivity.

Initiatic art is accessible when our soul can vibrate, rejoice, and be filled with delight, happiness or charm while contemplating a certain artistic work. This is a state related to the awakening of the soul.

Essentially, the artistic emotion awakened by art in the receivers soul has, according to the Shaivite tradition, of an ineffable and ecstatic savor, bearing the Sanskrit name of rasa. 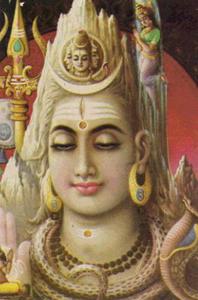 The most important aesthetician of India is unanimously accepted as being Abhinavagupta, who has two fundamental works on this area, Abhinava Bharati and Dhavanyabaratloka locana.

From Abhinavaguptas point of view, art is a manifestation that is both exterior, and interior in nature, a deeply spiritual manifestation.

Abhinavagupta indicates that the role of art is to awaken a certain ineffable savor, a sublime feeling, completely and definitely different from all other common human perceptions.

It has a general character, and it is a cosmic perception. On the basis on this intense emotion (anger, joy, fear, amazement, etc.), experienced in a fully aware manner, art determines the passage from individual (ego) to universal.

In art, the whole objective world is first of all reduced to the essential, then purified and transfigured; it is presented in a pure form, without any individual, limited contingencies. Authentic art transposes us almost instantaneously in a divine plan, generating in our consciousness a state of universality and union.