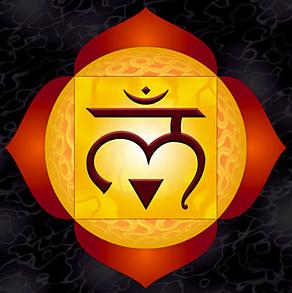 MULADHARA CHAKRA
Location: at the base of the spine, in the area between anus and sex.

Controlled psychic function: the will to survive, controls the survival instinct, the inner state of safety, self-confidence on a physical level, desire for material possessions, the chosen profession or job, the feeling of security, the belonging to a group and the group (family) identity.

Essential fears: fear of physical survival; abandon from the part of the group, losing the physical order, fear of being attacked or aggressed.

Characteristic reactions in cases of energetical disturbances: fear or runaway.

The element resonating with: subtle energies of earth. 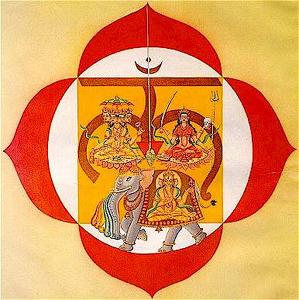 THE GROUP TEACHES THE INDIVIDUAL HOW TO SURVIVE
On the level of the first chakra, we learn that we belong to a group, to a community, and that we are in close connection to it. On a physical level, this is expressed through feelings such as: stability, safety, survival.

When we are born, our life depends on the group we belong to, on our family. Being a part of the group is a necessity on this level, because our fundamental needs of survival (food, shelter, clothing) are provided by the group.

At this level there is a difficulty in interpreting symbolically, of perceiving the real significance of the events in our lives.

Generally, the human being does not manifest as a conscious being, with a will of his or her own. This sense of identity is developed later on, on stages, from childhood to adulthood.

Life begins with the belonging to the consciousness of a group from which we assimilate a system of values, transmitted from one generation to another, but from whom we also take the preconceived ideas, fears, and weaknesses.

The interaction with a group teaches us to share our experiences with other people.

ALL IS ONE
This behavior guide is at the basis of the educational process of children during their first years of life, leading to the emergence of the feeling of belonging. 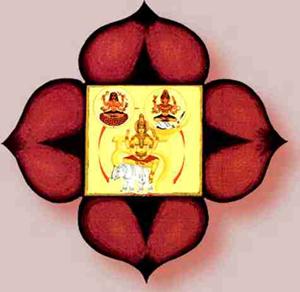 The group we belong to gives us our first lessons of life. It represents the world as secure or dangerous, rich or poor, educated or illiterate, a place to take or a place to give. And the group is the one providing the first information concerning the reality itself.

We inherit from our group the attitude towards other groups, as well as a system of beliefs that are a mixture of truth and fiction.

Many of these beliefs have an authentic value, representing the various aspects of the fundamental truth synthesized by the expression: “All is one.”

The process of the spiritual development challenges us to keep only the positive group influences, and to discard all the rest.

Our spiritual force grows when we become capable of seeing beyond the inherent contradictions to group teachings and to reach a deeper level of truth.

Every time we make a step towards the symbolic consciousness, we bring a positive influence on our energetical and biological systems. 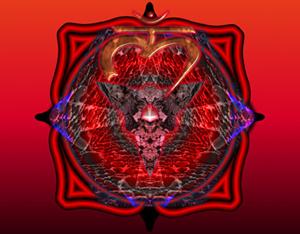 YOU HAVE THE FORCE OF THE CHOICE
Each of the group beliefs direct a certain degree of our energy in an act of creation, and thus has a direct consequence upon ourselves.

When we share a belief with other groups, we take part in the physical and energetical events created by these groups. This is the symbolic and creative expression of the sacred truth at this level: “All is one.”

The negative part is that the individualities involved in a negative group of action rarely accept their responsibility and their personal role in the action.

Owing to this “power” of the beliefs, be they good or bad, it is difficult to be in harmony with the group all the time. We are taught to make the choices that meet the group’s approval, and to adopt the same attitudes and social manners.

Symbolically, this adaptation reflects the union of the individual will with the will of the entire group. It is a powerful feeling of belonging to a family or a group in which there is a deep harmony on a physical, emotional and spiritual level.

Such a union gives us power as long as we continue to make choices according to the general tendencies of the group. In the same time, we have an inner tendency to explore our own creative abilities, to develop our inner individual force.

This desire is behind all our attempts of becoming “conscious”. The universal human travel towards perfection requires that we become aware of our power and that we find the best suitable way of using this power. 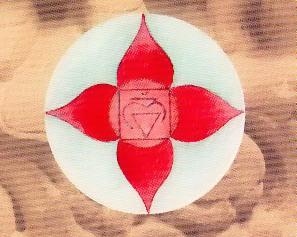 Becoming aware of the responsibility hiding behind a choice represents the essence of this travel.

Considering the things from this perspective, the evaluation of our personal beliefs and the separation of those that no longer sustain our spiritual evolution is an extreme challenge, and very painful as well.

Change is the very nature of life. It is the only constant of life. Inner and outer change happens all the time. Inner transformation infers giving up to certain beliefs and reinforcing others.

The first beliefs we need to analyze are the beliefs of the group we belong to. They were formed in a great span of time and are crucial. Our spiritual growth follows the structure of our energetical system.

The evaluation of our beliefs is a spiritual necessity. The moments of crisis in our lives underline the fact that we need to free ourselves from those beliefs that no longer sustain our spiritual development.

These points in which we need to choose between evolving and stagnating are our foremost trials. Each new crossroad means entering a new cycle of change, and change inevitably means leaving that which is familiar and known and heading for a new stage of our lives.

The great majority of people get stuck in between two worlds: one that they need to break free from and the other in which they are afraid to step.

We wish to become more conscious, but in the same time this requires becoming responsible or ourselves – for our health, career, attitudes, thoughts. Once we accept this fact, we will never be able to avoid the consequences of our personal choices. 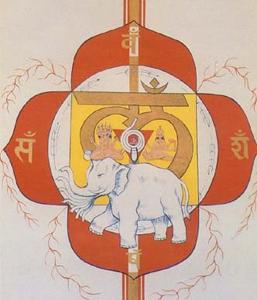 BEYOND THE LAW OF THE JUNGLE
The energetical predominance at this level is the sign of an excessive preoccupation of not getting hurt by the others.

The person feels more and more fear of being attacked, or on the contrary, has a strong tendency of attacking others, according to the polarity on which this imbalance manifests itself.

The fear involved here is often intense, irrational, associated to the types hunter-hunted. The primitive societies preoccupied mainly with hunting, in which the main issue was the survival in their natural environment reflect the predominance of the unilateral activation of Muladhara chakra.

Moreover, this activation is reflected in all social circumstances in which the law is temporarily suspended or destroyed or, on the contrary, it is applied excessively and rigidly.

The deities corresponding to Muladhara chakra are Brahma and Dakini and the symbolic animal is the elephant.