An Unified Theory of Consciousness, Part 4 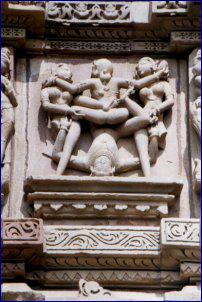 In the act of lovemaking the
couple embodies the dyadic wholeness of the Supreme. Tantric
sexual union resonates with the very foundational energies of
the Universe: it captures, magnifies and re-directs the essential
Cosmic Power of Life. It is therefore not by chance that sexual
intercourse brings the most intense emotional experience that the
human being can have while in the flesh. Therefore Tantra
uses it predominantly to create that overwhelming unifying
energy. The erotic impulse stirs up the Kundalini
energy so that it can rise, through the subtle duct of power
along the spine, to the highest center of power above the
head. This process renders the adept immortal:

"Loss of semen is loss
of power.  Exposure to sexual stimulation arouses this
power; controlled the power is like steam in a boiler, no
longer random."

"The Yogin
who can protect his Bindu (semen),
overcomes death; because death comes by discharging Bindu,
and life is prolonged by its preservation."

"Bindu
is under the control of the mind, and life is dependent
on Bindu.  Hence, Mind and Bindu
should be protected by any means."

In this vision, intercourse
becomes a genuine cosmic process at the level of the unified
microcosms of the couple, who tries to reproduce the cosmic union
of Shiva and Shakti,
i.e. of Consciousness and Energy.

"In Yamala
or Vira–Yogini
tradition [Tantric schools],
there is physical union (Samghatta)
between Vira (the male) and Yogini
(the female). The purpose is only to stimulate Nitya–Ananda
(the eternal beatitude) by means of the contact of the sex
organs. This contact gives intense delight [for the body and
spirit].

A text by Abhinavagupta

In this sacred act a savant
analogy intervenes where physical postures (Asana-s),
gestures (Mudra-s), colors, sounds
(Mantra-s), musical rhythms and
perfumes blend to create a paradise-like
environment. Thus, intercourse serves a purpose much
superior to that of sensuality.  his precise analogical
correspondence leads to a profound intermixing between the level
of the chaotic multiplicity in which we live and the Unique
Macrocosmic Reality.  Through frantic super-sensual fusion
of the subtle complementary principles, man and woman realize the
alchemical sublimation of the sexual energy. This phenomenon,
which leads to a gradual liberation from the painful limitations
of Space and Time that restrain terrestrial life, propels man and
woman towards the cosmic ecstasy (Samadhi).

Stated with extreme simplicity,
orgasm is an intensely beatific state of consciousness and
canceling of ego, with profound harmonizing, relaxing and
regenerative effects.  Male and female ejaculation is only a
complex physiological process of explosively energetic discharge
with a dim manifestation of a brief, incipient orgasm,
experienced in a selfish unilateral way.  During
ejaculation, the energy is quickly wasted and for no purpose
(except when conception is wanted).

THE CHOICE IS YOURS

The most important differences
between an ordinary orgasm with ejaculation and Tantric
successive orgasms without ejaculation are
illustrated in the following comparative analysis:

In Tantra,
sexual union is one of the possibilities offered to man and woman
to concentrate and direct the consciousness’s activity toward the
Supreme Being. Due to the enormous intensity of this union, the
consciousness of both partners develops and fuses, at the
beginning between themselves and later with the Cosmic
Consciousness. The indescribable beatitude then felt embraces all
things and beings. All that still subsists is a never-ending
thirst for unity, only a Lover and a Loved-one.

Tantra
is a genuine and exceptional form of yoga
which puts sexuality in its right place, recreating the missing
spiritual dimension of the sexual experience. This practice
expands the human consciousness to the greatest extent and
considerably enriches the knowledge of Man and the Universe. At
the same time, through the surprising links established among
apparently heterogenous phenomena and scientific facts, Tantra
opens the road toward infinite horizons, where many extraordinary
discoveries wait for the tireless practitioner.