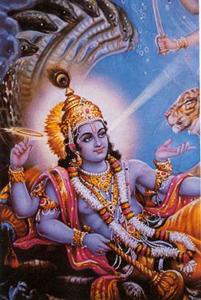 The oceanic sensuality of Vishnu’s sphere of action and influence makes way through all conventionalism and allows the rapid understanding and natural, spontaneous expression of the different roles that the woman plays within the creation. 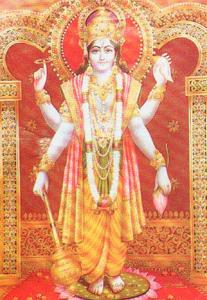 The secret Tantric techniques, when correctly performed allow us to elevate our level of consciousness through the integral transmutation of the sexual potential energy and its sublimation on higher levels.

VISHNU’S INFINITE FORCE MANIFESTS MAINLY THROUGH IDA NADI
The lunar, Yin (-) energy circulates in our body through Ida nadi. Its qualities are: humidity, receptivity, contraction, submission, modesty; when this force is mainly focused on the level of the head, in the area of Sahasrara, the crown of the head, Vishnu’s infinite sustaining force transforms intuitive wisdom into continuous aspiration and ardent spiritual life. Vishnu’s force is mainly maternal, intuitive, instinctive, imaginative and conventional.

HE PRESERVES THE PRIMORDIAL SOUND IN A SHELL
Vishnu represents that aspect of the divine reality that maintains and sustains the creation. The endless creative force of Brahma gives life to all beings, and Vishnu’s infinite sustaining force protects this life. 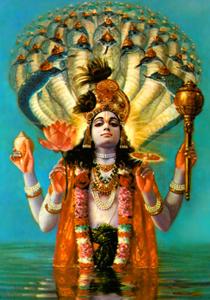 His devotees, named Vaishnava spread the spiritual and religious current known as Vishnuism, one of the greatest spiritual orientations of the Hindu tradition today.

Just as the feminine Supreme Energy, Vishnu has a “thousands names” which symbolize in fact just as many of his aspects. The daily repetition of Vishnu’s thousand names is a living proof of his devotee’s faith and ardor.

Although there are numerous representations of Vishnu, most times he appears under the form of a young, very handsome man, with four arms (several arms is an indication of the divine, showing that they can perform several functions in the same time).

The disk is a solar symbol, and the classical image of Vishnu, the ascendant, unifying, intellectual tendency of a human being. It represents the power that destroys the ignorance and the darkness, just as it is a symbol of a killing weapon, and of the sun. It destroys the evil through the process of illumination. 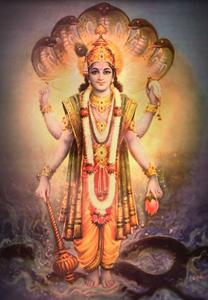 The opening of the lotus bud represents the realization of the possibilities contained in the “seed” of the human being. The scepter is a symbol of power and authority.

“Vishnu, the Preserver, sustains the whole creation and has the power of manifesting himself under numerous forms. In the great Cosmic Ocean, He sustains both the sun of the infinite and the eternal spirit of existence, which is the master of the universe.”

As the color blue symbolizes the infinite, Vishnu’s blue body is a sign of infinite force. He has no name, no form and is incommensurable.

The yellow color is associated with the terrestrial life, and therefore Vishnu’s yellow clothing symbolizes his incarnations as a man, fighting for justice and destruction of the evil.

The garland of flowers around his neck is a symbol of God’s worship. The precious stone decorating his neck indicates that Vishnu fulfills his worshiper’s desires and the crown is a symbol of the Divine’s power and supreme authority. His two earrings stand for the dual nature of creation.

His vehicle is a hawk, Garuda, endowed with highly unusual powers, which spreads courage and Vedic knowledge. His sky or subtle sphere of force is the celestial realm Vaikunta, build entirely from gold.

All buildings are jewels, and in the center of the town there are five pools filled with blue, red, and white lotuses. Vishnu is sitting on a giant lotus leaf, and beside him we find Lakshmi, his half.

THE WOMAN WHO ADORES HIM BECOMES “EVERY WOMAN”
“Lakshmi is Vishnu’s beloved; she is as beautiful as ten billions sunrises, and many think of her as the embodiment of sensuality.

Her charming eyes as a lotus, and adorned with garlands of lotuses, she is the mistress/ruler of all beings. Vishnu supports Lakshmi on his thighs, and she is the one who grants people prosperity all their lives.” (Lakshmi Tantra)

For the Hindu, the goddess Lakshmi represents success and prosperity. The term “Lakshmi” derives from the Sanskrit “Laksya”, meaning purpose, goal. She is the goddess of wealth, both material and spiritual.

The description of Lakshmi presents her as a beautiful woman, sitting on a lotus flower. She holds a lotus bud in her hand, symbol of beauty, purity and fertility.

Her four arms represent the four tendencies of the human nature: dharma, or correctitude, kama or desire, artha or wealth, and moksha or spiritual freedom. 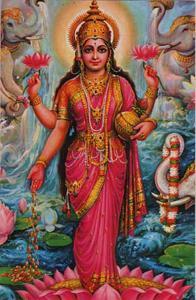 She accompanies her lover in every of his earthly incarnations, adopting various hypostasis, so that she becomes numerous wives for her Divine Lover.

The mysterious capacity of a beautiful, refined and vital woman of becoming simultaneously “every woman” (i.e. manifesting the qualities of daughter, mother, lover, virgin, sister, etc.) for her lover is in fact a huge source of energy and in the same time a revigorating contribution for a couple practicing sexual continence.

We have to try and introduce the archetypes of Vishnu and Lakshmi in our lives, projecting their images upon ourselves.

This enigmatic power, the highest form of the supreme Feminine energy is a direct expression of open intuition, as well as an energy of wisdom, spontaneous, and merry, which may overpass all obstacles on both her and her lover’s path.

Such a woman has to boldly teach her lover all her spiritual experiences. The success resides then in the sheer spontaneity, in her self-confidence and her focus on high ideals, in her sincere aspiration of offering something unforgettable and unique to her lover.

Her huge self-confidence is an essential condition in all rites of initiation and the goddess herself residing in every woman is awakened due to the processes of resonance.

Living in spiritual communion with Vishnu and Lakshmi equals becoming one with the master and mistress of sustenance, the embodiments of wealth, and material prosperity. Vishnu and Lakshmi are also responsible for sensuality, spontaneity, humor, and gaiety.

The Hinduist myths tell the story of Vishnu and Lakshmi’s spiritual son, the god of love Kama, who is in fact more or less of a “Hindu” Cupid. He sends his arrows with flower-pointers from a bow made of flowers and bees.

Kama embodies the eternal love between Vishnu and Lakshmi. He is mainly evoked during the spring and always during lovemaking.

According to the Vishnu Purana, “Vishnu and Lakshmi are eternally embraced in the game of love, and for this purpose they take on different forms. Their various external manifestations, ever changing, speak about the intimate, profound communion between the two. They represent The Eternal Divine Lovers.”

VISHNU BRINGS A SPIRITUAL MESSAGE TO MANKIND
One common representation of Vishnu is sleeping on the surface of the causal ocean. He dreams the game of the world and offers different methods for the sustenance and identification with the superior divine aspects, characteristic to the Divine Self Atman, and he usually does this by choosing from the “waves” of the Cosmic Ocean of Existence the “beatitude waves”.

He is also considered the guardian of mankind, the keeper of the Dharma – his role is to preserve the order in the universe.

Every time that humanity decays, he takes on the form of an avatar, a divine model coming on earth to show people new paths for spiritual development.

The ancient texts mention nine incarnations of Vishnu, incarnations reminding one of an old interpretation of the evolutionist theory.

Thus, his first incarnation was a fish, Matsya; the second a turtle, Kurma; the third a wild boar, Varaha; the fourth a lion; the fifth a dwarf, Vamana; the sixth a warrior, Parasurama; the seventh a hero, Rama; the eighth Krishna; the ninth Buddha.

His tenth incarnation, Kalki is supposed to come about at the end of this age, Kali Yuga. He is said to be the cosmic rider of Apocalypse, who will take on the role of destroyer of what is evil on earth.

HE CROSSES THE UNIVERSE WITH THREE STEPS
In the Veda-s he appears as a solar god, named also “he who acts”, name deriving from the verb vish = to act. Although he manifested his action through his three steps alone.

These three steps allowed him to measure the universe and its three aspects: physical, astral and causal.

Very often it is considered that these steps represent the rise, the climax and the setting of the sun. The zenith, the “Vishnu’s supreme step” stands for the subtle secret realm of the fortunate.