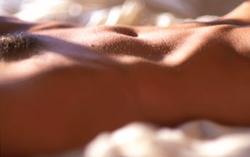 The feminine sexuality has been the source of deep mysteries, but also of mystifications throughout the western history.
The womans sexual organs are placed inside her body, not on the outside, as is the case of men, and therefore they were the subject of many studies, but also many confusions as well.
Any man, just as any woman has to know and be familiar with some basic elements about the womans body.
Keep in mind that these are mere general descriptions and the sexual anatomy of both men and women varies according to each individual person.

VENUSS MOUNTAIN
Going lower to the womans inferior abdomen, the first discovery you will make is mount veneris, the Latin for Venuss mountain.
As you probably know, Venus is the goddess of love. Venuss mountain is the area covering the pubic bone, and is usually covered by hair.
As a teenager, you must have felt this part of a womans body through her clothes. Venuss mountain is above the clitoris.
This area is very sensitive in the case of some women, while others will want you to focus your attention and touch much lower.

THE EXTERIOR LIPS
As you do deeper in between a womans thighs, Venuss mountain splits in two large lips. Although they are usually called “lips”, when the woman is not aroused, they are rather flat and do not look at all with some lips.

THE INNER LIPS
Unlike the exterior lips, the inner lips are hairless and are connected with other mucous membranes, just like the lips of the mouth.When the woman is not aroused, their color varies from pink, to brown and purple. During sexual arousal, these lips are dilated, thickened, and darker in color.
Sometimes their size can reach up to two or even three times their initial size, and they may change their color in bright red.
These signs are the signs of a great sexual excitation and announce the orgasm.

THE CLITORIS
Go up the inner lips, up to the point where they meet, right beneath Venuss mountain. Here they form the hood that protects the sensitive gland of the clitoris, which is similar to the gland (head) of the penis in its abundance of sensitive nerves.
Usually, the gland is covered by the hood, but it can easily be seen pushing the hood backwards. The gland is so sensitive that few women find its direct stimulation painful.
These women prefer the stimulation of the ax above the clitoris and can be felt underneath the skin as a mobile cord.
After several orgasms without loss or discharge of the sexual energy, most women who experience this feel that their clitoris is too sensitive to be touched for several good minutes after.
Like the penis, the clitoris is made of erectile tissue, and the gland is filled with blood when it is aroused.
Many people compare the clitoris with the head of the penis and from the point of view of their development they both have their origin in the same embrionary tissue.
Nonetheless, the clitoris is unique in the sense that it is the only sexual organ that exists with the sole purpose of erotic pleasure.
Consequently, we can no longer think or imagine that women are less sensual then men: the women even have a body part dedicated entirely and exclusively to provide pleasure and orgasm.

THE URETHRA
Beneath the clitoris there is the opening of the urethra, leading to the urinary bladder.
Unlike men, whose urethra is relatively long, extending along the penis, the women have a relatively short urinary route, which is also the reason for which the women tend to have more often urinary infections than the men.
The come-and-go movements of the intercourse may introduce certain bacteria inside the woman’s urethra.
If your lover has frequent urinary infections, encourage her to urinate after lovemaking, as this will help eliminate the possible bacteria.

THE VAGINA
In the lower part of the clitoris and the urethra there is the entrance into the vagina.
The walls of the vagina are leaning on one another, creating a potential space, rather than a real one.
The walls of the vagina have many folds, which explain the possibility to adjust to almost any type, size, or shape of penis, not to mention the size of a fetus during birth.
This capacity to dilate and contract, up to being tight around one finger, is the reason for which the differences in size between one penis and another are not usually a major problem.
In state of repose, the posterior wall of the vagina has about 7.5 cm, and its anterior wall has about 6 cm, as the woman becomes more and more aroused, the vagina becomes longer and wider.
The two inner thirds of her vagina are expanding, which often reduces the stimulation in the back of the vagina, while the first exterior third becomes tighter as it is flooded by blood.
This is one of the reasons for which a woman may still make love with a man with a small penis and be satisfied.
As we mentioned in out previous articles, if your lover has well-developed PC muscles, she can contract her vagina around your penis and she can enhance your pleasure and hers as well at the same time.If your lover enjoys deeper penetrations and it is difficult for you to reach that deep inside her, there are some sexual positions that “shorten” the vagina and make the deep penetrations easy to perform.
Many women realize they are more sensitive around the opening of the vagina rather than inside, while others say they have a bigger sensitivity in other areas, including the posterior wall or even the cervix.
There are no universal rules in this respect. Therefore, explore this fascinating realm of sexuality and sensuality with your lover and let her share with you what she enjoys the most!