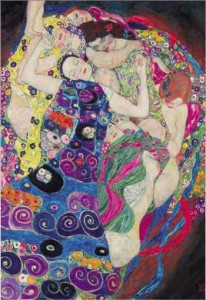 Anne tells us: “I discovered, by chance, during an extra-powerful orgasm, that I had physical capacities I did not even dream of. At the moment of the climax, I expressed my pleasure through an “ejaculation“.

It is a very powerful pleasure, which I feel tempted to live again and again, despite the shame that came with it.

I have a relatively normal sex-life and I would have never spoken if I did not notice an abnormal reaction of my organism. I can make it happen at will, but it worries and disturbs me.

I did not dare go to a doctor and get his professional opinion. One day, when I was supposed to meet a legal consultant, I was wrong about the hour of the meeting and I got there earlier than settled. The secretary left me waiting alone, in an isolated room.

A second orgasm, even more intense than the first one came, and in that very moment I heard the sound of an opened door. And the event occurred. Could it have been the shame of being caught, or the fear that got into me? I do not know.

Anyhow, my orgasm dissociated, overwhelming my as a huge wave. I flooded my hand and the chair at the same time. I sat back immediately, and I realized that luckily the opened door was not that of the room I was in, but that of a neighboring room. I was quite disturbed and confused about the liquid that sprung from me and I thought it was urine.

I cleaned everything, of course, but I was stunned. To clear what has happened I tried to reproduce the phenomenon at home, but the result was not satisfying. Then I recreated a situation in which there was the danger of being caught and… eco! The same result: an tremendous orgasm and the “flood”.

The problem is that for this orgasm to occur, as well as the flood, I had to be in the position of being caught, which really is not my type, because I am not an exhibitionist.

I even took samples from the flooding liquid and I took it to a lab, pretending that it was a friend’s urine. I thought it was not normal for a 38-year old woman to pee herself during the orgasm.

On the day of the results, the lab informed me that the friend had not sent urine to analyze, it was something else they did not know and consequently they could not run the tests.

On the other hand, after those orgasms I felt emptied and I got back to my usual “me” after an hour or two.

My question is: If this is not urine, than what is it? It does not look like the lubrication liquid in neither color, nor consistency. It does not seem to have come out of the vagina, because after the “flood”, the think, dense and whitish lubricating liquid is on its place.

Another question would be why did the emotion of being caught made me experience such a powerful orgasm? This somewhat created a state of repulsion in me, as it looks so ridiculous. This pleasure is complete, and so powerful that I was ever tempted to do it again and again, despite of the shame I was feeling. At the same time, the risk of being caught was a real terror.

Miss Trick’s answer: From what you tell us, you have had ejaculations of liquid coming from the sur-urethral glands. These glands of the prostrate type exist in women in the area of the urethra. You seem to have very important sexual pulsions, since you say you masturbated in your counselor’s waiting room.

The fact that you were risking being caught placed you in a particular situation, which most likely triggered a powerful orgasm. It is possible that during this orgasm occurred also a contraction of the pelvis and consequently the content of the urethra was eliminated.

Your observation that the liquid came from the urethra, not from the vagina was correct. You finally describe a phase of exhaustion that made it impossible for you to have an orgasm during the following few hours.

This phase you described is very similar to the post-ejaculatory processes that occur in the case of men. You seem to have a great sexual assurance, which allows you to put in practice, more than other women, your most exotic and daring fantasies.

Virgil tells us: “I made my lover experience a very powerful orgasm, so powerful that she “ejaculated”. Going beyond our surprise, it was an experience we performed again, because at this point nothing else could satisfy her.

I read in a magazine the stories of other women with similar experiences. In the moment of the orgasm appeared a liquid clear as water. The event was ironically named “explosive orgasm” or “U.F.E” – unidentified feminine ejaculation.

I realized oral stimulation is very pleasant for women because it creates very powerful sensations for them. I also noticed that every few minutes she would release a liquid that always surprised me.

My lover experienced these emissions in a very intense manner, and I felt that during those moments for her existed only that immense pleasure in which she floated. Finally, she was completely exhausted and incapable of the slightest gesture.

She needed at least three days before being able to start again. What I do not understand is why this phenomenon occurs only in some cases. I heard a lot of talking about the G-spot, and therefore I wanted to know if there are women who reach the results I mentioned immediately, and if the specialists know anything about this.”

Miss Trick’s answer: The phenomenon we mentioned in the previous articles, kalas are barely accepted, even by the women who experience them. Among the 40 women there were few whose stories were particularly interesting.

In their cases, it was obvious that what happened was not ejaculation. During lovemaking they experienced sensations of an extreme voluptuousness, and they felt their vagina was filled up with a liquid whose provenience they could not explain.

This is a very seldom phenomenon, but which is very clearly mentioned in the entire Eastern literature (see Kama Sutra, Ananga Ranga).

We do not recommend feminine ejaculation any more than we recommend male ejaculation. In both cases, the sexual energy is lost, and the repetition of this process leads to sickness, exhaustion, and accelerated aging.

Sonya tells us: “I always enjoyed lovemaking. Now I met the man of my dreams. One night, while making love, something very odd occurred: I was very aroused and nothing interested me from the outer surroundings. It was as if I had entered into another world. I did not perceive the walls of my room, I felt only an endless space in which the two of us were making love.

All of a sudden, I felt a liquid flooding my vagina. I had no idea what that was. I felt that a well of life was springing from me. I wanted to stop, but it felt so good that I kept on moving and feeling my lover deeper and deeper inside of me.

He also was surprised by the turn of the events. Nothing else beside our lovemaking seemed to matter for him as well. I felt as if floating in another world. We stopped after two hours or so.

It was the first time when we managed to make love for such a long time. I do not know what that was, but I’d really like to find out so we can do it again. And again. And again…”

Miss Trick’s answer: It is obvious that you experienced an ecstatic state of consciousness during lovemaking. You could maintain your consciousness in this state because of the intense orgasm that you felt. Your immersion in orgasm for a long time determines the occuring of kalas.