At that time I was in love with a young artist, Robert. He was exactly the type of man I was looking for, big, strong, and handsome and it was so easy for him to conquer me.
Though our sexual intercourse was so primitive, cruel and savage at first, he totally made my teenager dreams come true – he behaved as any other man should behave with a woman.

But at that time I was starting practicing YOGA and I was having my first subtle perceptions so as I started wondering if I could introduce these wonderful feelings inside my intimate sexual life?

One night, while making passionate, mad love, like we used to, I felt the need for a lot more peace inside myself, a lot more love Something inside told me that we could do a lot better, that sexual intercourse could help us discover new dimensions, where there was no limit between lovers. And that moment I told Robert about my feelings, “Please, Robert, do it slower. Let’s try something new!”

And we simply started moving a lot slower. It was a sudden transition at first, I felt like we stopped, like we weren’t making love any more. But this sensation disappeared soon and we started caressing each other at first on hair, then on the back of our necks and we lowered our hands and fingers down our bodies. Robert was exploring so tenderly and sensuous my breasts, hips, thighs, my whole body and I felt I was dilating; I started floating with pleasure and happiness. There was a very deep and profound inner feeling, but we kept on moving one towards the other, in sensuous, ample waves. 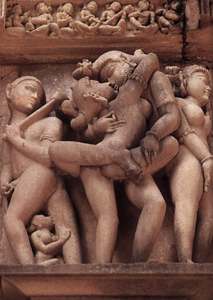 Those moments I was on top of him – so excited. It was something new in our lives and feelings and I was responsible for it. It was a subtle change of roles and I felt Robert changing, becoming so tender and kind. We were so close to each other and I felt for the first time that a man could really understand a woman. We staid that way for minutes, feeling the excitement and becoming conscious about how it raised into our bodies.

I was started to feeling a warm and yet burning energy inside my pelvis that was extending all over my body. In order to maintain the sexual excitement also, we went back, when it came to fade away, to our usual way of making love, so alive and exciting. Robert was penetrating me so confidently and powerful, being at the same time tender and passionate. The excitement grew very quickly and we became like a volcano ready to erupt. But immediately before the climax we stopped, relaxed and became quiet again, happy to savoir the effervescence of our feelings. We did the same thing a number of times and then something unexpected happened. Suddenly we both felt like we were projected into an unlimited space, infinite, filled with warmth and light. 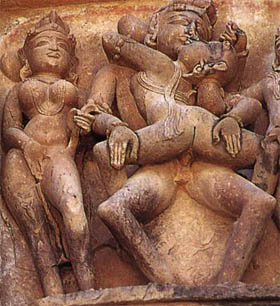 The boundaries between our bodies had disappeared and with them the differences between a man and a woman. We almost became one and the same human being. The feeling was so full that we could almost touch it. We were out of ordinary time limit and we felt like we could stay that way, in that ecstasy, forever. There was no need for a discharge or even for moving. There was nothing else to do, to achieve. It was everything inside. We were in ecstasy.

As many, I’m sure – and this sentiment is more complex in a woman – I was frustrated by the fact that I wasn’t using even 10 % of my sexual-erotic potential. I was realizing that an average pleasure, a domestic sexuality was not all and it really was only the beginning”