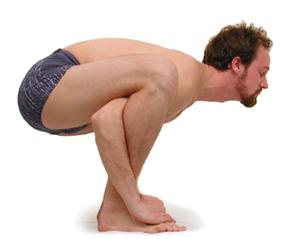 Mandukasana or “The Frog” Pose has various variant. The one we are about to introduce to you in the following, it is a counter-pose for Padmasana (The Lotus).

A counter-pose represents a physical attitude with complementary effects for the initial pose. For instance, an asana of flexing the body towards the front has a counter-posture that consists in a backward flexion.

HOW TO PERFORM IT
Place your feet so as the distance between the soles is 35-40 cm. The toes are oriented towards the exterior. Thus, the soles are almost in a straight line. 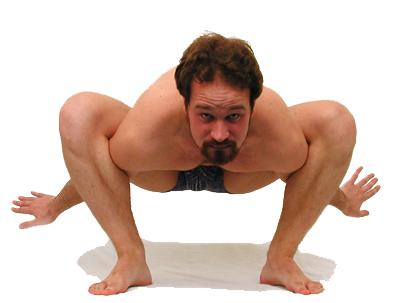 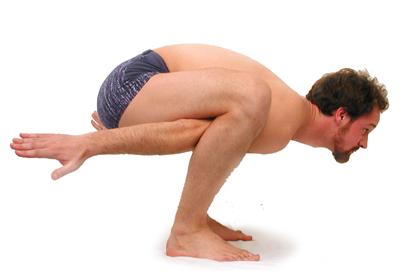 Lower your trunk so that your shoulders are between your knees, passing your arms behind the shanks and holding the inner side of the soles with the palms of your hands. 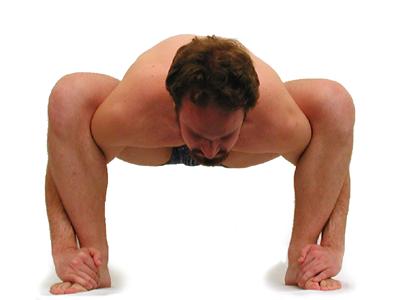 It is very important to have a solid base to support the hands and for this we need to place our hands underneath the soles of the feet.

Then we lift the head as high as possible and at the same time we spread the elbows as much as possible, which will push towards the exterior the feet and knees, acting upon the joints. 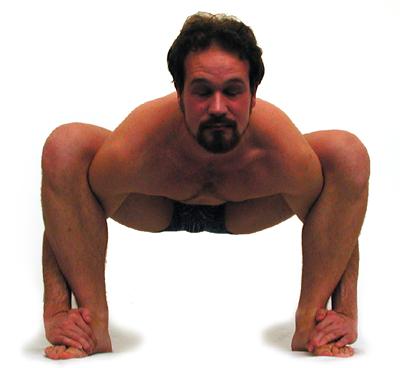 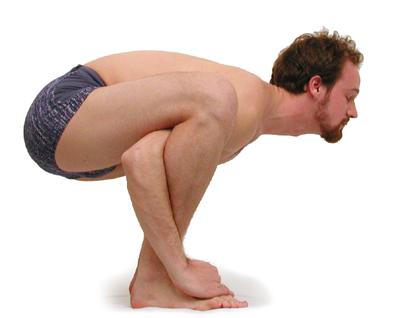 Stay in this position, eyes open, as if you look towards the sky, or ceiling, the head bent backwards as much as possible, to keep the trunk and spine as straight as you can.

The muscles of the back is stretched and tensed, which is one of the objectives this exercise has. In this pose you close your eyes, and focus mentally on the abdominal area, in the solar plexus, the point in which is projected Manipura Chakra.

After this, begin a pulmonary hyperventilation. The active element of circulating the air through the lungs is the abdominal musculature in this pranayama technique.

The inhalation occurs naturally, immediately after you relax the abdominal muscles. Both the inhalation and the exhalation should take equal time, and they are both performed only through the nose.

Thus, the “motor” that sets in action the respiration is the abdominal musculature, and not the thoracic muscles. The number of breaths per minute is approximately 80 – keep in mind that this is a ventilation movement.

Caution: we will not give up the correctness of the movement – which implies a high amplitude and a great capacity of the pranic energy assimilated – for the speed of execution. Thus, the rhythm is individual.

Perform this accelerated breath for at least one minute. The hyperventilation has as a direct effect the elimination of an important quantity of CO2 from the lungs, a profound ventilation that causes the amplification of the bio-energy and a state of re-vitalization.

In the complete and correct position of Mandukasana, the retention of the breath should naturally follow the hyperventilation.

Thus, performing the set of fast breaths with an inhalation afterwards, we block the breath with the lungs filled and relax the body, without coming out of the pose.

Do not take the hands from the soles; just relax in the final pose, relaxing as well the trunk and the head. Retain the breath with your lungs filled for as long as you can without forcing yourselves, and then exhale.

Repeat the technique for at least two times. For two executions, the total time required is approximately four minutes.

CONTRA-INDICATIONS
There are no special contraindications in the case of Mandukasana. However, the people having a epilepsy condition should not perform the hyperventilation, because it may trigger a crisis of epilepsy.

Normally, this pose should be placed in the preparatory stage of the asanas, acknowledging the hyperventilation that accompanies it.

EFFECTS
The asana acts especially in the joints of the knees and ankles, which are very worked out from the practice of Padmasana, the Lotus Pose.

Mandukasana determines in these joints tensions that are opposed to those appearing in the case of Padmasana, and this is where the complementary aspect of Mandukasana comes from.

Therefore, you can perform Mandukasana after Padmasana and after any meditation. The persons who suffer from pains in the knees because of Padmasana can also perform this asana, Mandukasana in order to ease those pains.

Obviously, Mandukasana is not the unique, infallible solution to all the joints problems. Nonetheless, in a great number of situations, it acts favourably and it never makes the condition worse.

The tension of the muscles of the back fortifies it and it also brings about supplementary relaxation after you practice this asana. This is why the yogis recommend its practice in the morning, before practicing the Sun Salute (Surya Namaskara).