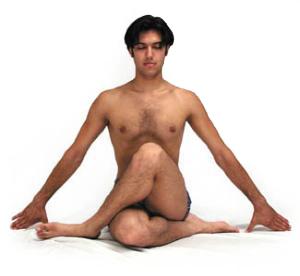 In Sanskrit, VIRA means man, in the virile sense of the term. Moreover, because a man was considered a hero as well, the term VIRA symbolizes the heroic man. Consequently, VIRASANA is “the Pose of the Hero” or “the Virility Pose”.

This asana has many different names: Guptasana, or “the hidden pose”, SAMKATHASANA (SAMA means the same or equal, and KATHA means hips). 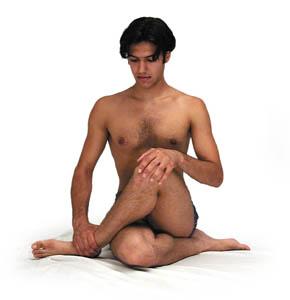 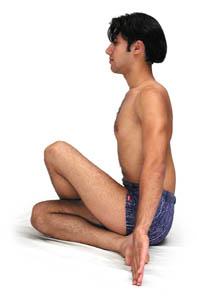 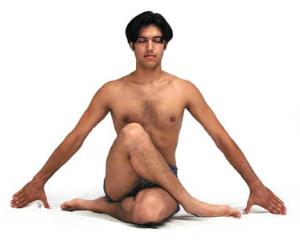 This asana acts mainly on the femoral joint and on the sciatic nerve. It has beneficial effects on the male genitalia as well.

It gradually cures sciatica.
If you experience pain in the incipient stages of its practice, do not overdo it.
If you are having a sciatica crisis, and the pain is quite intense, cease the practice of this asana until the crisis is over.

However, for those who intend to practice this asana even during a crisis, very important is the starting position, which has to release the sciatic nerve.
In order to do this, first sit on your knees, and then put the left knee over the right knee (your heels are not close to one another).
Gradually, put the pelvis on the floor, in between your heels. This is for the LEFT SIDE EXECUTION.
In order to perform this asana on its right side, do the same steps, but simply change the left foot with the right.

If you are having problems with the left foot, insist on this asana realized with the right knee on top of the left and vice versa.

Men will “note” an empty space situated between the heel of the first bend foot and the perineum.
This is a big enough hiding-place for the sexual organ.
This particular place is responsible for the name GUPTASANA associated with this asana.

The sexual organ has to be put here before you bend your other knee, which will fix and press the base of the penis, but not the testicles as well.
This thing requires that the practitioner is naked while performing this asana.

This pressure reduces the sanguine flow in the penis.
Virasana acts on the endocrine glands, stimulating the secretion of rejuvenating hormones.