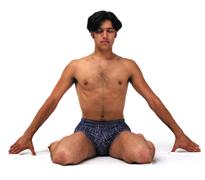 ETYMOLOGY:
The word YONI means, in translation from Sanskrit, “vulva” (the feminine genital organ). Yet this position is not only for women. The men can also perform it because it increases their virility.

The weak stimulation of the YONI CHAKRA leads to the absence of the orgasm. Lack of orgasm is, for men, a part of impotence that appears either through painful ejaculation without orgasm, or through the impossibly to have an erection, or orgasm.

The waking up of YONI CHAKRA produces certain pleasant physiological transformations that manifest through: the increasing of heart-beating rhythm and arterial pressure, the increasing of skin temperature, of the respiratory rhythm, of the blood flow in the erected tissue, in the genitals, lips, ear lobs as well as the euphoric contractions of all muscles and light contractions of the perineum muscles accompanied by pleasure thrills.

The orgasmic creative energy resulted from the fully experience of the orgasm, circulate freely through the healthy body. It amplifies extraordinarily in case of those who practice continence (the sexual energy control during lovemaking). Blocking this energy in case of inhibitions, repressions or frustrations leads to the appearance of psycho-physiological disturbing and also somatic affections.

By becoming fully aware of YONI CHAKRA’s activity there will be a euphoric inner force inside you called the ORGASMIC FORCE. This force wakes up very easily if there isn’t any sexual potential discharge (ejaculation in men’s case, orgasm with sexual energy discharge in women’s case).

By amplification of this orgasmic force in your being you will notice a flourishing and harmonization of the entire organism. If it lacks you’ll remain a prisoner of anxiety. In such situations the subject often tries to defend through suppression. One of the consequences is the lack of relaxation, a deep tension or the muscles’ hypertonicity in certain area of the body.

By performing of this asana you collect in your aura, through the resonance process, the specific energies of YONI CHAKRA (the orgasmic energy of the being). The free flow of this energy in your body favours the overcoming of the life’s obstacles. Practicing this position makes it easy for you to come back to a satisfying sexual activity and to become aware of the orgasmic energy. 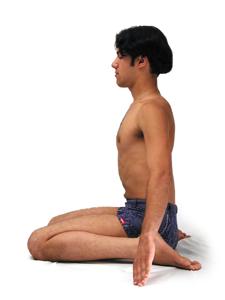 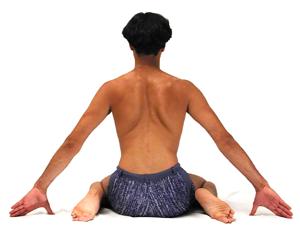 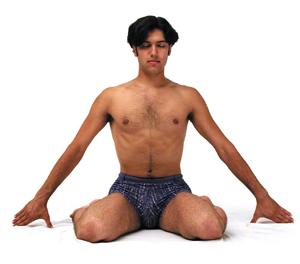 EFFECTS:
Due to the position of your legs your blood flow will be a lot slowed down at that level. As a consequence of this fact the blood quantity that cannot get to your feet will irrigate other body parts. The abdominal parts will be the first that will take advantage of this.

There is also a better circulation through the capillary. In time, this will lead to the increasing of the elasticity and tonus of certain areas, such as ligaments.

The practice of this asana is an excellent exercise that prepares us for other difficult positions: SIDDHASANA (the perfect position) and PADMASANA (the lotus position). The execution of this position increases the flexibility of the coccyx – femoral articulation, knees articulation and ankles articulation.

For women the position of pelvis, of lumbar and sacral areas as well as the intensifying of the energies’ flow in the sacral area, they all eliminate the physiological disorders that appeared during period or menopause. YONI ASANA eliminates sexual problems: frigidity and impotence. It also eliminates cases of early ejaculation and leads to sexual continence.