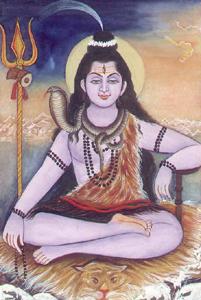 “Prana, the vital breath, originates in the Self. As the shadow and the person who generates it are inseparable, so are the Prana and the Self. Prana enters the body at birth so that the mind’s wishes, which have come down from another lives, to be fulfilled.”

In fact, the final goal of all breath techniques is that of prolonging the retention until the practitioner reaches higher stages in Yoga (such as supernatural powers) and his karma is destroyed.

The control of the mind over the vital forces of the body will have an immediate and direct effect over the sexual centre, in the sense that the overall level of energy is higher.

The practitioner will notice an increased amount of energy and of his receptivity. The senses become sharper. Any couple wishing to experience the Tantric ecstasy while making love should pay special attention to the breath. 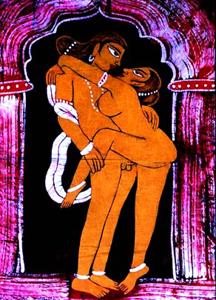 A secret technique consists in bringing together the lateral margins of your tongue and sticking out the tongue through your lips; breathe in forcefully, retain the air inside your lungs for as long as you can, without forcing and then breathe out through your nose.

According to Shiva Samhita,

“The yogi who practices the Raven’s Beak in the morning and at sunset, is free of all diseases. This practice leads to obtaining clairvoyance and other miraculous powers.”

The Yogic tradition speaks about five vital breaths (prana or the force of life). It is said that, just like a king empowers certain authorities to govern territories of his kingdom, in the same way the primordial prana contains other four types of prana, each designated to coordinate specific functions in the body. 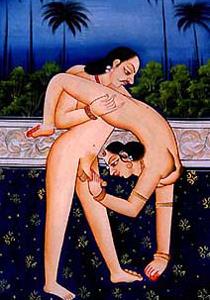 Tantra Yoga aims to inverse the ‘natural’ course of apana, making it unite with prana, determining thus a complete transformation of the being.

The distribution of prana (absorbed through the lungs) into the five types of vital energy takes place during the retention after inhaling the air. This process may also be the support of profound meditation.

MEDITATION TECHNIQUE
Imagine the air coming in through your nostrils as if it were less thick than water. Pour it into the inferior part of your abdomen, as if it were a vessel. When breath is complete, move on to the retention and imagine that all the openings of your body (ears, eyes, nose, mouth and anus) are shut.

Imagine the prana circulating to the five parts of the body. Try to visualize this process with your mind’s eye. While on retention, try to take out the best and most valuable parts of the air you have inhaled. Then breathe out imagining how all impurities and physical disorders leave your body and go back into the earth in order to be purified and regenerated.

Breath control is essential in practicing correctly the Tantric and Taoist way of lovemaking. These breathing techniques will never be practiced immediately after having a meal or after making great effort. 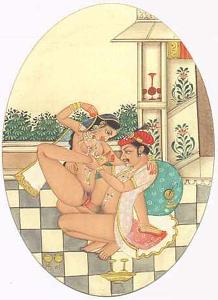 You should always be aware of your individual breathing pattern. You should not be afraid of the force of your breath. On the contrary, aim to learn how to use it in a careful and conscious manner. By being aware of your own pattern of breathing, as well as of your lover’s, the ecstasy is quite close.

“The wise men do not talk about the capacity of uttering words, about the sight, the hearing, or meditation; they speak only of the different types of prana-s that make all these things possible. For all the rest is nothing but the manifestations of prana.”